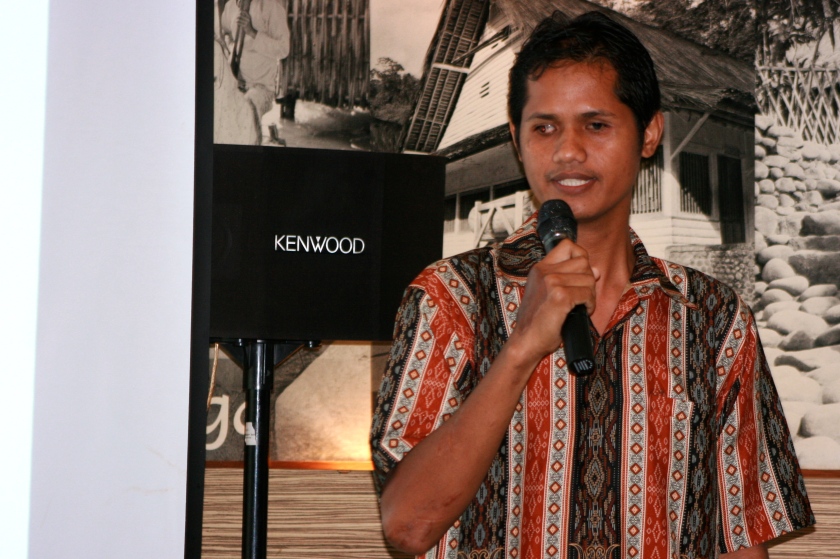 Sudirman Abdul Talib, 31, a victim of the 2004 Australian Embassy bombing, believes some terrorists do not understand the impact of their actions. [Elisabeth Oktofani/Khabar]

Those who have suffered at the hands of violent extremists believe some recruits will be moved to repent once they understand how terrorism destroys lives.

Victims of terrorism gathered on Sunday (September 8th) to commemorate a tragic episode in Jakarta’s recent history – namely, the 9th anniversary of the 2004 Australian Embassy bombing, which killed nine people and wounded at least 150 others.

“Many people might have forgotten [about the incident]. But I think it is important to make them aware that the terrorists’ victims do exist, and we are still struggling with the aftermath of the attacks,” said Mulyono Sutrisman, chairman of the Kuningan Forum, an association of people who have been affected by extremist violence.

Such atrocities must not happen again, he said at the event, which was sponsored by Alliance for Peaceful Indonesia (AIDA)

Sudirman Abdul Talib, 31, is a former security guard at the embassy. He lost his left eye in the attack and suffers from a permanent disability affecting both of his hands.

“As victims, we want to be involved in the government’s deradicalisation programme, in eliminating terrorism and preventing the growth of violent extremism in Indonesia,” Sudirman told Khabar Southeast Asia.

He believes that if all victims are united against terrorism and promote peace, it will make a difference in the future.

“We just want to be involved in making Indonesia more peaceful,” he added.

Sudirman, who now works as an administrative staff member for the security guard department, says he does not want to become a prisoner of the trauma he experienced. He believes his story can be used to change the minds of those who have been misled by violent and extremist groups.

“I have met a few former convicted terrorists. I told them about the impact of the terrorism. They were shocked and cried. They regretted their actions and apologised,” Sudirman said. “It is clear to see that sharing and explaining the impact of terrorism on the victims is an effective method to convince them [terrorists] to stop their actions.”

The director of AIDA, Hasibullah Satrawi, said that Indonesia has the potential to win the battle against terrorism – not only because of law enforcement efforts, but also because victims of terrorism have been willing to join in efforts to combat it.

“The victims play a strategic role in bringing Indonesia to a more peaceful place,” he said. Therefore, it is very important to empower the victims – whether mentally, physically, or financially.”

Al Chaidar, a terrorism analyst, agreed that those affected by violence have great potential to combat recruitment by extremist groups. He agreed that the government should involve victims of terrorist activity in deradicalisation programmes.

“By meeting and seeing the victims, the terrorists would consider the actions that they are going to take because they have seen the impact of their attacks,” he added.

Sudirman, the wounded security guard, says he is troubled that his hometown of Bima, in West Nusa Tenggara, is being appropriated by terrorists as a base for planning their attacks. In 2011, police raided the local Umar bin Khattab Muslib Boarding School, where they found bomb-making materials as well as weapons and jihadist videos.

“Bima is a very religious place,” Sudirman said. Muslims pray five times a day and have strong faith. As far as I know, they are not radical people. They need moderate religious leaders to tell them that Islam is actually a religion of peace,” he said.

Those vulnerable to the message of radical terrorists need to be aware of the consequences of violence, he reiterated. “They need to meet people just like us to show them the impact of terrorist acts. It is also hurting Muslims as well,” Sudirman said.