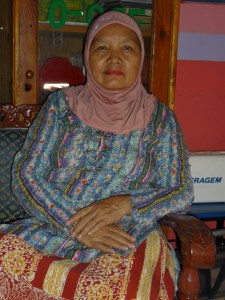 When Sri Asih isn’t celebrating the birthday of one of her 14 grandchildren with her husband, Mohammad Mupriyanto, she’s flexing her entrepreneurial muscles. Asih, 60, who moved from Sragen, Central Java, to Jakarta in 1968, has done everything from making gado-gado (salad with peanut sauce) and mopping floors to sewing buttons and serving food. Today, she explains how one of her businesses, Badut Mupri, has been bringing joy to the kids of Jakarta for 35 years, why being a clown sure beats being a criminal and how, if you can turn a frown upside down, she’s hiring.

Why did you come to Jakarta?

Most of my friends’ parents were asking them to get married at a young age. That was my worst nightmare because I wasn’t ready to get married at that stage. So I decided to leave Sragen to seek a better future in Jakarta.

How did you meet your husband?

It was one week before Idul Fitri in 1969. He had been coming to the warung [food stall] I worked at for some time and one day we had a conversation. We were both alone in Jakarta so we decided to live together and get married.

And what do the two of you do now?

My husband and I run an entertainment business, Badut Mupri [Mupri the Clown]. Actually, we started by selling handmade cardboard masks at an art bazaar in Ancol in 1975. My husband wore a mask while I stood next to him selling similar masks. He didn’t do anything funny, he just wore the mask, but people laughed anyway. It was obvious that people were hungry for entertainment. So that same day we decided to start our own entertainment business.

What was the first day of business like for Badut Mupri?

What role do you play in the business?

I’m the wife of Badut Mupri, a maker of clown costumes and also the owner of the business. I do whatever the business requires, be it acting, sewing or booking parties.

How do you promote your business?

We never really went out and advertised until my youngest son, Eko, helped us make a brochure and created a Web site for us [http://badut-mupri.com/]. But basically, the business operates by word of mouth.

Clowning is a great form of entertainment. It makes people happy and puts smiles on kids’ faces. But it makes me sad when I see people dressed up like clowns just to beg for money on the street. I mean, it’s better than going out and robbing people, but it can ruin the image of clowns for kids.

Have you ever painted your face and worked alongside your husband?

Yes! One day in 1978, we had overbooked and we didn’t have enough performers to fulfill all the bookings, so I had to dress up. If I’m not mistaken, we had 19 performances scheduled for 19 different places that day. So I had to go and work at a birthday party hosted by Gen. Tjokropranolo [a former governor of Jakarta]. I went there as a duck.

How did it feel performing for everyone?

It was very strange and everybody was laughing and making fun of me. They grabbed my tail and pulled me here and there. But then again, nobody could see that it was a grown woman in the suit.

How does it feel being the wife of a clown?

Wonderful. I’m proud of it! Not only has my husband made work for himself, but he has also created jobs for others. Many people mocked my husband when he said he wanted to be a clown. They said he was crazy, but which is worse, being a clown or a criminal?

Do you have any dreams you haven’t fulfilled?

I want to build a park or a playground for children so they can expand their imaginations. I want it to be a place where kids can play and have fun, but also a place to learn.

Do you ever think about retiring?

As long as we are still able to work, we have no plans to stop making kids smile. But I expect that one of my children will take over so that the business, which started from zero, doesn’t just disappear when we retire.

Where do you find your clowns and acrobats?

We welcome anyone who is willing to work and never says I can’t do this or that, because people can accomplish anything as long as they have the will to do so. We have a place for them to stay and we have jobs for them.