A Muslim scholar is among those expressing doubt that the prohibition will make women safer.

A planned regulation banning female passengers from straddling motorcycles in Lhokseumawe, Aceh has sparked criticism from Indonesians, including a leading Muslim scholar who says it does not reflect the spirit of Sharia law.

Suaidi Yahya, the mayor of Aceh’s second largest city, said earlier this month he would issue the regulation because “it’s improper for women to sit astride. We implement Islamic law here.”

“Women sitting on motorbikes must not sit astride because it will provoke the male driver. It’s also to protect women from an undesirable condition,” Suaidi told AFP on January 2nd.

He said women could face forward in an emergency situation, or if they are driving, as long as they are dressed “in a Muslim way”.

His administration has started distributing handouts throughout the municipality to inform residents of the new policy before the plan is legally implemented in a few months, he said.

The plan has sparked widespread criticism from Indonesians who say it is unsafe.

Cut Fitriani, 34, an Acehnese woman who moved from Aceh to Jakarta in the last two years, told Khabar that the Lhoksumawe administration has demonstrated ignorance of safe driving principals.

“I don’t see that the regulation is very Islamic. Instead, it puts women in a dangerous situation. I believe that drivers will have difficulty keeping their balance,” she said.

“When you are driving a motorcycle, you have to know how to keep it stable and balanced,” Jusri said.

“When a motorcycle passenger is sidesaddle, it would be difficult for the passenger to find a safe position because her two legs would not be within the handlebar area,” he added.

“One of the safety requirements of driving a motorcycle is that any object or passenger must stay within the handlebar area.”

Siti Musdah Mulia, chairwoman of the Indonesian Conference on Religion and Peace (ICRP), argued that the regulation has nothing to do with Sharia Islam and it puts female passenger in danger.

Further, she argued that the bylaw is incompatible with the spirit of Sharia.

“A regulation must give a protection to the citizen, instead of putting the citizen in danger. Even during the prophet period, the prophet’s wife was sitting forward-facing while they were riding a camel,” she said.

“Therefore, I do not think that there is a theological reason for this regulation,” she added,

By implementing Sharia Islam, the local government must improve the welfare of its citizens. That is what being an Islamic society means, Siti told Khabar.

Home Affairs Minister Gamawan Fauzi said the central government will review the planned bylaw, and could annul it.

“[It will be reviewed] whether the bylaw is too much or [whether] it is to maintain the tradition,” he told reporters January 7th in Bogor, outside Jakarta.

“If it is to maintain the tradition, it is alright. [But] it should be studied first [to find out] what is the purpose of the regulation,” he said, adding, it would take up to one month to evaluate the bylaw, and that his office had not yet received a copy of it. 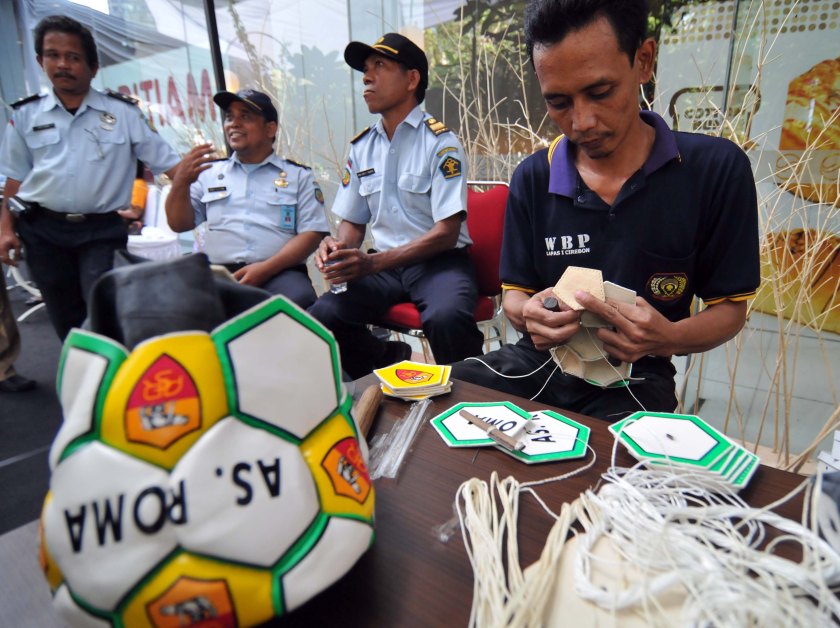 Ade, 37, demonstrates his skill making footballs at the Napi Craft 2012 exhibit in Jakarta. Income from sale of prisoners’ products will be given to them upon their release, according to officials from the Directorate General of Corrections. [Photo by Clara Prima/ Khabar]

Ade, a 37-year-old prisoner at Cirebon Class One Prison, recently had the opportunity to demonstrate his skill making footballs at the Napi Craft 2012 exhibition in Jakarta.

The event held December 17-21st at the East Building, Mega Kuningan, South Jakarta, was intended to show that inmates – napi – can be creative, innovative and productive.

Ade, who is serving a six-year sentence, said he enjoys making footballs because it allows him to develop his abilities and keep busy.

The father of a six-year-old boy is also hoping to use his skill to work in a factory or establish his own business when he is released from prison two years from now.

“I can make four to five footballs in a day. If the material is soft, it only takes me an hour to make one football,” Ade told Khabar Southeast Asia.

Some 149,873 inmates are incarcerated across Indonesia, according to the Ministry of Justice and Human Rights, which sponsored the exhibit.

“That number has great potential and can be used to produce certain types of products. So it also can support government programmes in economically creative ways,” said founder of Napi Craft 2012 Evi Amir Syamsuddin during its December 17th opening. She is wife of Minister of Justice and Human Rights Amir Syamsuddin.

“Other than that, the exhibition is also expected to improve the inmates’ quality of life as well as their welfare – especially for those who join the Prisoners’ Workshop,” or Bengkel Kerja Naripidana,” she said.

Though many inmates think the training is a waste of time, he said, because they are unsure how to market what they make, false eyelashes made in West Java’s Garut Penitentiary have already found customers in Taiwan, Switzerland and China.

“Through this exhibition, we wanted to show to them that their products can be appreciated and recognised by society,” he said. “It needs to be understood that getting recognition will motivate them to improve the quality of their product.”

“The income from the sale will be given to the inmates upon their release. They will have their own money to start a new life because not all of them will be simply accepted by their own family,” Ismail said.

Arum Wahyuni, 26, an exhibition visitor, said she was impressed with several of the products. “I would say that many of the handmade crafts are properly made. It is also amazing that those fake eyelashes, which were made by prisoners, are exported to other countries,” she said.

“I just hope that when they are released from prison, they use their skills to start a new, creative and innovative life, especially knowing that they have the ability to be a better person,” Arum added. 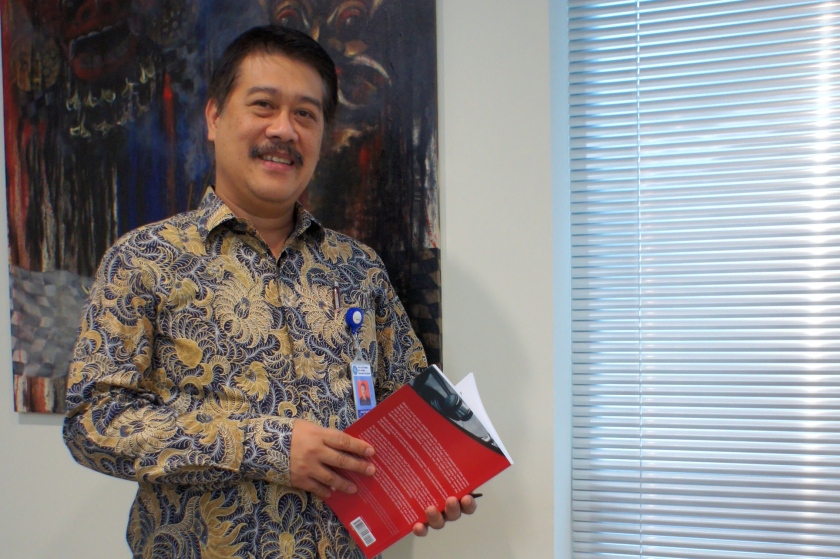 Indonesia hopes to have a potent new weapon against terrorism this year: a law enabling authorities to freeze bank accounts or seize assets of terrorists and those who finance them.

The law will create the legal mechanisms needed to target terror financing, according to Agus Santoso, deputy chairman of the Financial Transaction Reports and Analysis Centre (PPATK), an independent institution charged with fighting money laundering and other financial crimes.

“We have been working on this regulation for the past three years. We really hope that it will pass by February 2013,” he said, adding that the law is urgently needed.

From January to July 2012, financial service providers reported 191 suspicious financial transactions to PPATK. Analysis of the transactions found that 48 were linked to terrorism financing.

The proposed law is not the result of pressure from other nations, Agus said. “We know for a fact that Indonesia has been threatened with terrorism for many years. Therefore, our need for this law is real,” he said.

Although the country insists it does not need outside pressure in order to act, experts acknowledge there is a concern about meeting global standards.

“Indonesia is one of two G-20 countries that does not have regulations regarding the funding of terror-related activities,” Santoso said.

“It needs to be passed soon because FATF will review Indonesia in 2013. We need that law to be able to say that Indonesia has a law to prevent funding for terrorists,” he said. “If we are downgraded to a non-cooperative jurisdiction, we will be put on the same level as countries unworthy of international financial transactions.”

Being labeled “unworthy” could hurt the country’s economy, the finance minister added.

In May 2012, the anti-terror squad Detachment 88 captured 11 individuals suspected of hacking into multilevel marketing websites and stealing some 8 billion rupiah ($835,000). The money allegedly was used to finance terrorist activities such as terrorist trainings in Poso, Central Sulawesi and to produce explosive devices used in churches.

Rizki Gunawan and Cahya Fitriyanta, two of 11 alleged terrorist hackers, are currently on trial in West Jakarta District Court, charged under the 2003 Anti-Terrorism Law and the 2010 Anti-Money Laundering Law.

According to Agus, however, the existing laws do not precisely fit the alleged crimes, demonstrating the need for a new legislation.

In particular, he said, the 2010 Anti-Money Laundering Law “does not specifically regulate the terrorism financing system,” he said, adding that a Counter Terrorism Financing Law would close the gap.

The new law will be strictly implemented and applied to anyone who finances terrorism activity, he stressed.

“The person does not have to be a terrorist. Any individual or organisation that supports terrorist activity will be subject to this law,” he said.

Ordinary citizens told Khabar that the government should also work to make the Indonesian public better aware of the dangers.

Taufan Restu Putra, a 32 year-old Jakarta resident, said he appreciates government efforts to protect Indonesian citizens and the Indonesian financial system with this new law, but he expressed some concern about how it would be implemented.

“I think the government needs to publicize the regulation properly as soon as it is passed – especially in the remote villages and also the mosques. So that anyone who has a good intention to give to a charity will not be manipulated by terrorists to gain financial support,” he said.