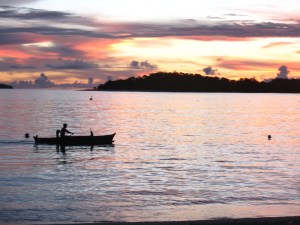 A fisherman was on the way home

An outboard engine was started by a fisherman, its rattle breaking the morning. One after the other, boats are moving, making a line, moving in the foreground as the sun appears from behind the horizon. It is 6 am. The island is still quiet as the fishing boats pass from view and out of sound. Sometimes a late sleeping fisherman disturbs the peace again as he makes his way across the coats to catch up with the fleet. This is a unique stage portrait of Minahasan life which is passing by me as I am enjoying the early morning tropical breeze by the beach on Gangga Island. Gangga Island is an isolated white sand beach destination in 150 hectares of natural garden setting 3 kilometers north of the coast of North Sulawesi. Minahasa is one of the races in North Sulawesi.

Subsequent to having breakfast, I am getting ready to explore the world under water by catching the boat to one of the snorkeling spots. I am sure, it will be an excellent experience, as this area is the part of the world’s Coral Triangle. However, I am not going diving but I am just going snorkeling.

Surrounded by the silence of the island, I walk down to the wharf, where a sexy locally made boat has been waiting for our group.

“Hello, good morning. How are you?” said Ayoub, a Minahasan boat crew, greeting us with a friendly smile before we get into the boat. The engine comes to life and we are ready to sail to the waters of neighboring Tindila Island.

Moving further away from Gangga Island, leaving a trail of bubbles which disappear into the sea after only a few second we reach the snorkeling spot above a reef tinged in light blue after only ten minutes sailing.

While we are waiting patiently to jump into the water, we are given some guidance by Anton, the snorkeling guide, which must be listened to for our safety under water. Afterwards, one by one, my group slips over the side into the sea.

“Wow! This is wonderful” I say to myself. It is so beautiful and so different with the world above water in which I live. I feel as though I am flying freely like an Alap-alap hawk in the air, watching the fish peacefully lead their lives in an around the reef.

I can see a blue star fish, which look so calm and still, gumming itself to the ground. Or, over there, there’s an active small blue fish with a yellow tail. They call them Chrysiptera parasema, which like to move here and there. Pretty clouds of fish of many varieties swim all around me. On one occasion, Anton shows us where hundreds or might be thousands of fish are moving here and there in a large group. “It is indeed a wonderful world of fish.”

They are magnificent. They look like a great group of human being who want to move somewhere, whether because they feel panic or excitement as we approach them.

I don’t know how to describe this beautiful life under the water, although it is my job to. An amazing natural ecosystem seemingly without any human touch upon it. However I can see part of the coral that has been bombed. Destroyed and dead. A sign that our fishermen once used dynamite instead of their nets and their talent. But local government, cooperating with the community are working together to restore these broken fish reef homes and preserve coral ecosystem. It is a great chance that I have to be here. On a clear sunny day, I am exploring the world under waters around the Tindila Island for more than an hour. But, unfortunately, we must finish our trespassing because suddenly the currents bring a sea covered in garbage.

“It is strange that so much rubbish is floating in this area. The local government should have taken an action to keep this environment clean. Well, not just the government actually, but also the local people and passing ships who throw the garbage in the sea.” Tommy Davis, a Canadian tourist, who is disappointed with the floating garbage.

The garbage forces us to stop snorkeling, and after a short break on Tindila Island for few minutes before we sail back to Gangga Island.

Once again, I would say that this is a special part of the world. But the occasional wave of rubbish atop the sea almost ruins a spectacular setting; however there is more to see. The blue water, the tropical rain forest, the local fisherman and the underwater world are just part of a unique isolated paradise off the north coast of North Sulawesi.

While wondering about the secrets of this little island, Anton and Ayoub circumnavigate Gangga Island. In only 150 ha, this island has just two villages. Comically named Gangga Satu and Gangga Dua. From the boat, I can tell that Gangga Satu and Gangga Dua are two very different villages but similar at the same time. Different in how the way they build and develop their fishermen village and facilities. But both remain undeveloped and poor. Interestingly, one is noticeable for its several mosques, and the other two Church spires. While a handful of motorbikes busied themselves on the seafront one could not see any vehicles.

However, Gangga Satu is a slightly more developed village, where an environment friendly resort, “Gangga Island”, was built and developed. As the only resort on the Gangga Island, it trains and employs members of the local community. It reminds me of a conversation that I had with Hanne Harbol, General Manager of Gangga Island, last night, in which she said that they are seeking to preserve the environment both human and natural. “We have a program for the local society, especially for the kids. Every month, we will ask them to come here and introduce them with the sea’s ecosystem. This program is meant to protect this island from the damage, whether neither in the land nor in the sea”. But the big question is what about all the garbage?

Thinking about that conversation, the things I saw, heard, tasted and smelled, it makes me speechless and I realize how beautiful this Indonesian island is, and that there are many more of them. However, I wonder how we will take care of them all. Precious that they are they are not crowded with people, vehicles, office buildings and shopping malls. The peaceful natural world is more than enough and this is what I am looking for by coming here, a white sand beach holiday which is far from the modern life and business city.

Finally, having gone around the island we arrive at the wharf. I am feeling so happy for the experience that I had today. The world under water, the garbage, the island, the people, the current and everything that I am seeing are wonderful. I am smiling as much as I ever have, as I walk back to my bungalow to get ready before having a Minahasan meal for my hungry stomach.

It is indeed a great day, but the day has not ended yet as the blue sky is slowly turning into red as the sun dips towards the horizon. Under the vanilla sky, I sit by the beach, enjoying the dusk with the sillouettes of the fishermen sailing past me, one by one, on their way home The only sounds being the rattle of an old outboard engine and the breaking waves on the beach.

Ubud: Heaven on Earth
Elisabeth Oktofani
As I walked through the verdant environment near the Balinese art center and then entered between the huge wrought iron gates of The Mansion, a luxurious estate in Sayan, Ubud. I was in search of a two in one experience. It is called Heaven and Earth Spa.
With his hospitality, Gary Nemmers, the manager of Heaven and Earth Spa, welcomed me to an expansive and stunning Balinese wantilan estate to have a special treatment on the morning of Wednesday, 17th of June 2009. He offered me a choice of select essential oils for the “rejuvenation treatment”. I chose the spa’s own brand of sandalwood oil, which has special qualities that helps in strengthening and conditioning the skins, in addition to stimulating and shooting the ol factory senses.
As I entered the double treatment spa room, Sundanese melodies were playing, it gave a unique and relaxing atmosphere to an other wise natural Balinese setting, where heaven can be found on earth. So, without any hustle or bustle, I gave my feet a rest and the therapist gave me a peppermint footbath to wash away my worries. It was a pleasant start to my rejuvenation treatment.
After she dried my feet, I was led to an elegant room frame with rattan walls, crisp white curtains with an adjoining stone floor bath room, to have a 60 minutes deep tissue lomi-lomi massage. Lomi-lomi massage is a unique traditional Hawaiian massage. It provides an experience that realigns a deeper layer of muscle and soft connective body tissue. It is an excellent therapy for treating stiff and sore muscles, that’s why the rejuvenation treatment has become a favorite at Heaven and Earth Spa.
Subsequent to finishing the sixty minutes treatment, I was taken to the Tea Garden to have a ceremonial tea with their own secret blend as the end of the treatment.
“Once our guest finished the treatment, we don’t want to say “Ok! Madam, Sir. Thank you very much for coming! Bye…Bye Bye”” Gary said.
“That’s not what we want! What we want is we want to keep our relationship with our guests. However, we don’t know when we are going to meet again. But at least we want to give a different impression to them with this tea ceremony because we have a chance to have a conversation.” Explained Gary.
While I had a lovely sixty minutes rejuvenation treatment, Heaven and Earth Spa also offers a variety of reflexology, acupuncture, yoga and meditation services. But when I come back I am going to have one of their tempting body scrub, and once again I think I will find heaven on earth.
The Bud Magazine, volume 1, July-September 2009
Widgets