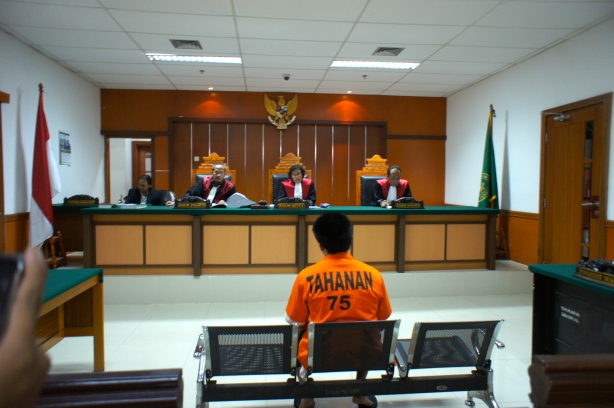 Alleged hacker Cahya Fitriyanta listens as his indictment is read out at West Jakarta District Court on October 8th. Prosecutors have accused him of premeditated murder, money laundering and electronic-system hacking. [Elisabeth Oktofani/Khabar]

The case is significant as Indonesia works to “connect the dots” on terrorism funding.

The trial of alleged hacker Cahya Fitriyanta currently under way in Jakarta represents the first time a suspect accused of stealing money online to finance terrorism has been prosecuted in Indonesia.

Prosecutors are seeking the death penalty for the 26-year-old cell phone technician, who has been charged with premeditated murder, money laundering and hacking an electronic system. His trial opened at West Jakarta District Court on October 8th.

According to the indictment obtained by Khabar Southeast Asia, Santoso, the leader of the Qoid Asykari Jamaah Ansharut Tauhid (JAT) Poso branch, ordered Cahya and Rizki Gunawan, another alleged hacker, to collect money to finance military trainings, weapons purchases and the support of terrorists’ wives.

Prosecutor Bambang Haryadi, who has handled many terrorism cases, told Khabar that Cahya’s case is the first connected with online terrorism financing to go on trial. But it will be a challenge for prosecutors to present all the necessary evidence, especially regarding fund movements and bank transactions, he said.

“Up to now, we already had hardware evidence such as the computer processor unit for money laundering and also electronic-system hacking charges,” he said. “We also need to present the funds movement and bank transactions. Therefore, we have to ask the Financial Transaction Reports and Analysis Centre (PPATK) to provide us the transaction analysis for the evidence.

“It will take some time. However, we will try our best with the evidence that we have obtained.”

Noor Huda Ismail, a terrorism expert and founder of the Institute for International Peacebuilding, told Khabar that the legal system has not been able to connect all the dots on terrorism funding.

“One of the challenges for the Indonesian courts is to prove these circumstances. Since the 2002 Bali bombing, the court has not found any evidence, such as bank transfer receipts, to prove where the funding came from,” he said.

Cahya is being prosecuted under the 2010 Anti-Money Laundering Law because Indonesia does not have a law that specifically regulates terrorism financing, he said.

“Unfortunately we do not have specific regulation for terrorism financing. But the government is now working on the anti-terrorism financing law. The draft has been submitted to the House of Representatives (DPR).”

According to the indictment, Cahya provided up to Rp 10m ($1,050) in financial support to the wives of terrorists in Bima, West Nusa Tenggara, through Jipo, a terrorist suspect who is at large. Cahya also gave up to Rp 150m ($15,650) for jihad preparation, also through Jipo.

Cahya and Rizki attended military-style training in Poso and Malino, both in Sulawesi, for nine days in the second quarter of 2011, along with 20 other people from Java, Kalimantan, Sulawesi and West Nusa Tenggara province, the indictment said.

During the session, they got physical training, assembled homemade bombs, shot guns and practiced archery and basic military tactics.

The purpose of the training was to prepare for Jihad Fisabililah, or violent attacks on nonbelievers, including Christians in Poso and the Indonesian government, because it has not implemented Sharia Law.